While Erstwhile Mezcal’s current lineup does not feature any mezcal made by Rey, my co-founder Kevin and I are his fans in our personal capacity as mezcal enthusiasts.  We have many of Rey’s distillations in our personal mezcal library – which we diligently schlep back to New York in our suitcases, and generously share with friends and fellow lovers of mezcal.

Want to learn from a master on how to make mezcal the traditional way?

On a recent January 2020 visit to Rey Arellanes Angeles’ palenque “El Doctor” in Santa Catarina Minas, we were lucky enough to catch Rey and his team prepping the earthen oven to cook an ensamble batch of four to five different agave varietals.

Keep on reading for Rey’s pro tips on how to prep and pack you horno (earthen oven).  A picture is worth a thousand words.  There are valuable takeaways here, even for mezcal nerds and enthusiasts who are well acquainted with the steps of mezcal production. 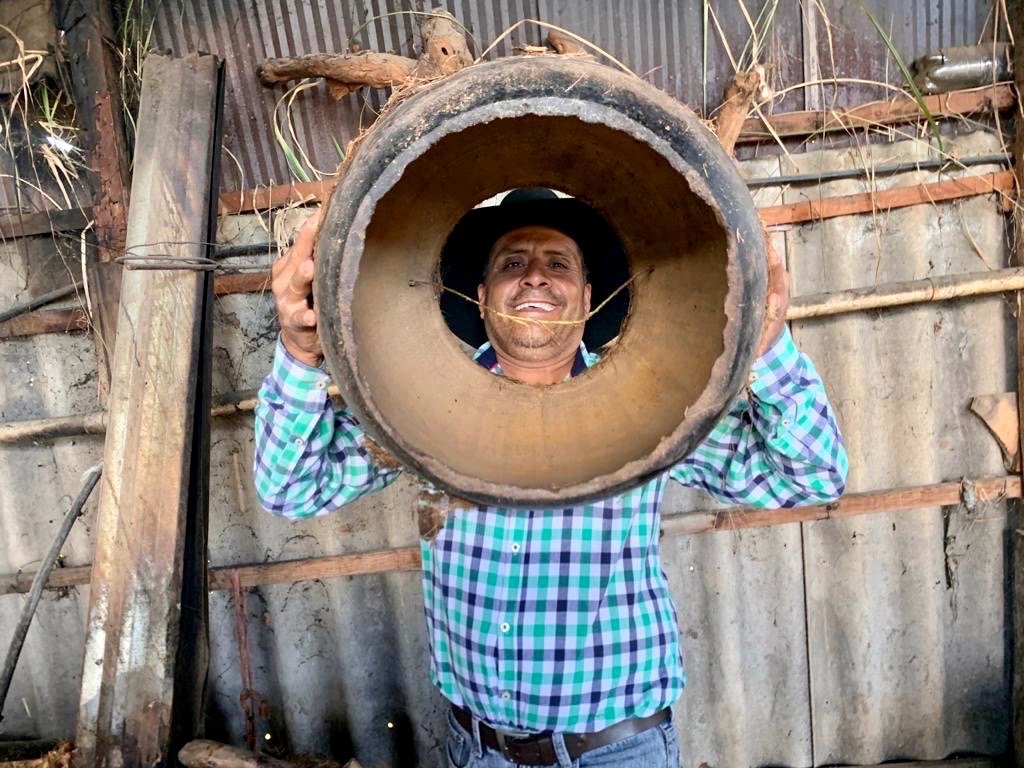 Rey is based in Santa Catarina Minas – a community in Oaxaca, Mexico known for ancestral mezcal.  There is plenty to discuss as to what makes mezcal ancestral, and how it is different from other mezcal categories (e.g., artisanal mezcal) – we will save that for a future blog post.

My quick elevator pitch for ancestral mezcal: pre-Hispanic, no machines, no metal allowed. 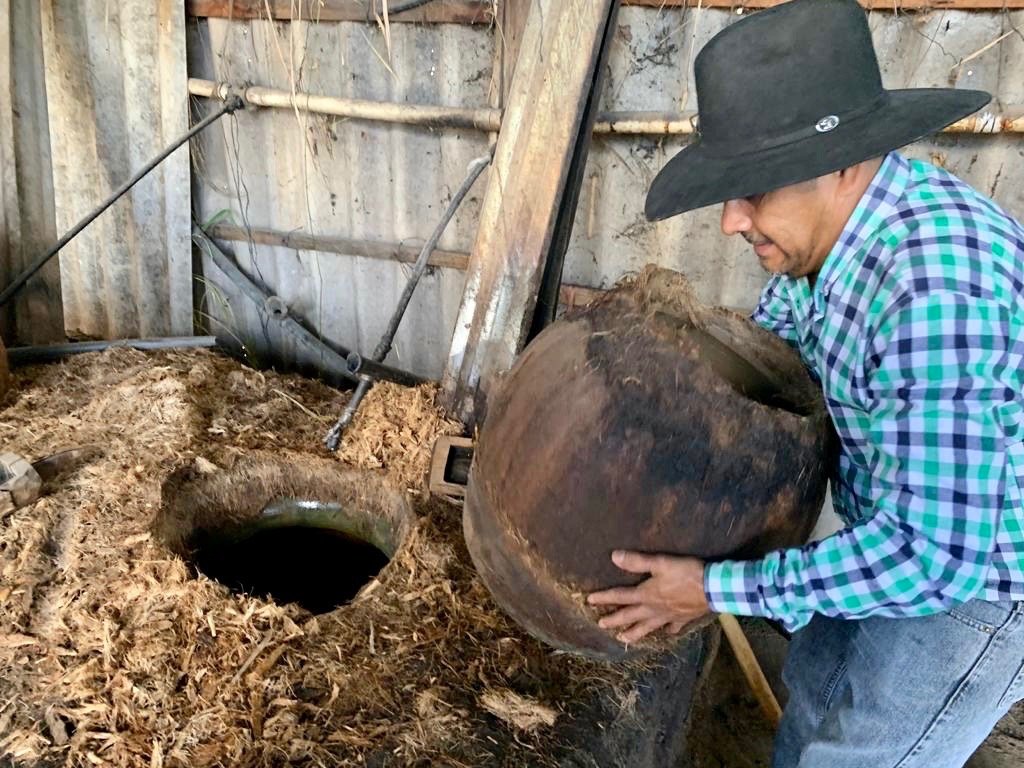 Pro Tips on Prepping and Packing the Oven for Mezcal

Back to Rey and Minas.  When we showed up at his palenque with our friends Seyla and Richard, it was a little past Noon.

The firewood had been lit since early morning, and smoldering under the stones for about six hours when we arrived.  The potent, tear-inducing smoke had subsided long ago.  The mound of hot stones at the center of the oven had been heated nicely and evenly for hours, and were almost ready for the agave piñas (the cores or hearts of agave plants). 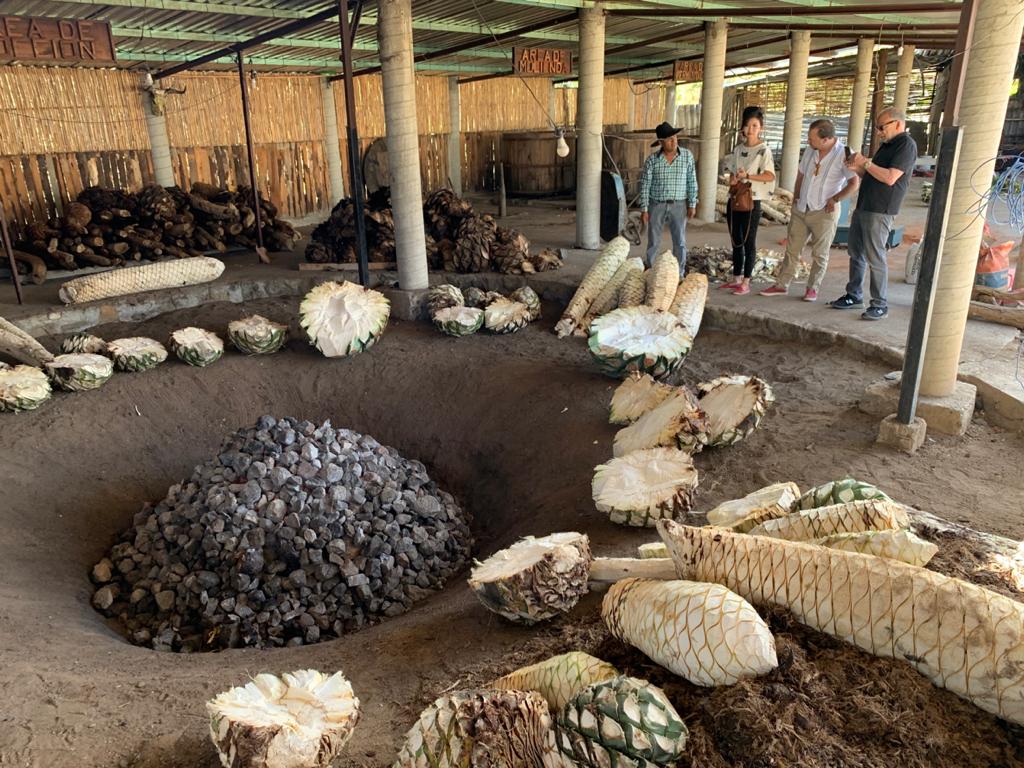 Plan ahead.  Pack your horno like you would a suitcase in preparation for a trip.  Do not throw your agave in haphazardly.  Instead, lay out all the agave piñas you plan to use, while waiting for the oven to heat up.  Take a visual inventory of all agaves you want to use, their relative shapes, sizes, etc.

Get rid of empty space.  Maximize surface contact between agave and heat.  Fit everything into the oven in a logical order to facilitate these goals.

Chop the round, thick piñas into halves ahead of time, so their flat surfaces face the hot stone core when loaded into the oven.  This way, you maximize the surface contact and have better heat access to all parts of the piñas throughout the cooking phase of mezcal production.

Push or stomp on the piñas toward the center of the oven, as needed.  This further eliminates empty pockets of space between the piñas and the hot stones.

Do not burn or char your piñas.  The taste of smoke can be delightful in mezcal.  Char is far less pleasant.

Note the protective layer of bagaso (agave fiber, a natural byproduct of traditional mezcal production), between the piñas and hot stones.  This keeps charring to a minimum without blocking off the heat source, which is necessary for cooking the piñas.

Put the long, unwieldy ones on the outside.  Again, this goes back to Tip 2 above re getting rid of empty space – especially important if you are making a batch of mezcal from a blend of more than one agave varietals of different shapes.

Here, Rey and his team had a good amount of tobasiche, an agave from the Agave karwinskii family that is known for its long, narrow shape.

Note the tree branches on the outer edge of the oven.  They serve as a sort of natural netting – supporting the long, skinny agaves like tobasiche; and making the entire ensamble as compact as possible.

Sign up for our newsletter so we can keep you posted on future blog posts like this.  You can do so at the bottom of this page, or by emailing us at info@erstwhilemezcal.com.