The Earliest Known Map of Oaxaca 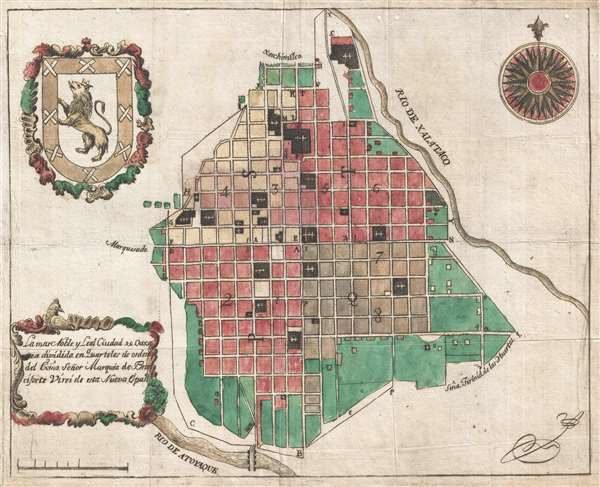 Erstwhile Mezcal is the passion project of its two co-founders: Yuan Ji and yours sincerely. From its inception, Erstwhile Mezcal has always been inextricably tied to our never-ending love affair with Oaxaca, now a second home for us. Oaxaca was where we fell for not only mezcal, but for Mexico itself.

I am the owner of Geographicus Rare Antique Maps. We deal in antiquarian cartography from the 16th through the early 20th centuries. Around the time that Yuan left her legal career as an antitrust lawyer to devote herself full-time to Erstwhile Mezcal, I stumbled upon this c. 1795 colonial era map of Oaxaca in the inventory of a colleague in the rare map trade. To me, the map had a certain no sé qué.

Early cartographic representations of Mexican cities are rare. Most were based on manuscripts prepared in Mexico, then engraved and printed in Europe. To be sure, a few maps were printed in Mexico, including a map of Hispaniola issued in 1658 that is believed to be the first map printed in the New World. Nonetheless, a sophisticated cartographic printing tradition did not develop in Mexico until the late 19th century. Even in 1847, when negotiations related to the Treaty of Guadalupe Hidalgo brought to a close the Mexican-American War, and radically reshaped the political future of North America, the map used by both sides was printed by John Disturnell in New York – not Mexico.

This simply goes to say that Mexican imprint maps, by which I mean maps printed in Mexico, are quite special and exceedingly rare. The ONLY other known example of this map is held in the Archivo General de la Nación in Mexico City.

This map was printed in Mexico around 1795 and, to the best of our knowledge, the earliest known printed map of Oaxaca City. Admittedly we have not been able to examine the official archives in Mexico, and it is possible that an even earlier map may one day be discovered.

The map illustrates the city of Oaxaca on its colonial grid, nestled between the Atoyac River and the Jalatlaco River (now underground). Centered on the modern-day Cathedral and the Zocolo, it covers from Margarita Maza de Juarez in the north (with the Iglesia de Guadalupe being the northernmost church), to Calle Vega in the south; and from Galeana in the west, to Leonardo Valle in the east. The area depicted roughly encompasses the modern-day Centro Historico.

The impressive Templo de Santo Domingo and its attendant gardens are prominent at top center, as is the former Convent of Santa Catalina de Siena – a Spanish baroque architectural dream that was built in the 1500’s and now houses the atmospheric and elegant Quinta Real Hotel. The last time we stayed at the Quinta Real, we had room views overlooking Los Lavaderos, the impressive stone fountain where the nuns used to wash their laundry.

This map was made for and dedicated to Don Miguel de la Grúa Talamanca de Carini y Branciforte, then the Viceroy of New Spain. Don Miguel was born in Sicily and joined the Spanish navy in 1755. He married the sister of the then Spanish Prime Minister Manuel de Godoy and quickly rose in rank, being awarded the title of Marqués de Branciforte just prior to being named Viceroy of New Spain on March 26, 1794. While unpopular and corrupt as a Viceroy, he did sponsor several urban development projects throughout Mexico – one of which may have been the raison d’etre for this Oaxaca plan. The partial mileage scale and the blank space in the lower part of the cartouche suggest that this plan was left unfinished.

Erstwhile Mezcal is proud to own this remarkable piece of Mexican – and more particularly, Oaxacan – history. To me, this map symbolizes a bridge between my current career in the rare map trade and the new adventure that Yuan and I are embarking on together in the mezcal business. When we are not in Oaxaca, it reminds us of the city we love, its incredible heritage, and the richness of what we have built (and will build) together. In the future, we would love to incorporate this map into the label design for one of Erstwhile’s limited-edition small-batch mezcals.