Skip to content
Home/News/Erstwhile? Velociraptor? Our Name and Logo Explained.
Previous Next

What is the story behind Erstwhile Mezcal’s logo?  Why is our brand called Erstwhile?  We get asked these questions a lot from folks who are getting to know us for the first time.  I figured it is high time that I write a blog post addressing these excellent questions.

WHAT IS THE STORY BEHIND ERSTWHILE MEZCAL’S LOGO?

When we set out to design Erstwhile’s flagship line, we wanted to create something beautiful in every sense of the word.  We were confident that the quality of our mezcals would speak for itself, but the packaging needs to not just match but elevate its content.

A woman warrior holding a flowering quiote, riding a velociraptor and charging forth.  That is Erstwhile Mezcal’s logo in a nutshell.

Erstwhile Mezcal is a woman-owned, women-led business.  Elevating underrepresented voices in our industry, including those of women, is one of our core values.  In almost every mezcal producer family we have met and work with, there is at least one strong, capable woman in the family who makes things run.

We want to honor that along with the spirit of an agave plant in Erstwhile Mezcal’s logo.  The Erstwhile woman is strong and capable.  She’s got spunk and grit, but not at the expense of beauty and femininity.  She is warm.  She is whimsical.  She has a great sense of humor. 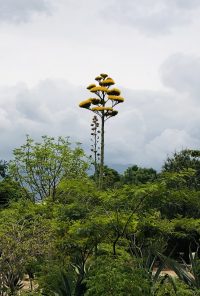 A flowering quiote in the Jardín Etnobotánico de Oaxaca. Photo taken in August 2018.

But you do not want to mess with her.  The Erstwhile woman is surely going where she sets her mind to, and there is no stopping her.  She is such a badass that she can hoist, in mid air, an entire flowering quiote.  With one hand.

Quick note on the quiote, for those who are not familiar.  Quiote is the stalk that shoots out from the core of an agave plant when the agave is mature and ready to produce future generations.

Depending on the agave varietal, the quiote can shoot up to a height as tall as 30-40 feet so that they are far out of reach from animals and harm.

It is a majestic sight to behold.

Why velociraptor?  This warrior needs her steed.  A velociraptor is an Erstwhile creature (more on that in a moment).  And I think we can all agree that a velociraptor is much more awesome than, say, a horse.  She is fast, and steadfast.  She is ferocious but loyal.  She has a delightful Game of Thrones sensibility, and a great smile to boot.

I mean, come on, who wouldn’t want to ride the Erstwhile velociraptor if given the chance!

IS THAT A BABY IN THE BOTTLE?

Yes!  The black-and-white backdrop image, which you can see if you look closely through each bottle of Erstwhile Mezcal, will change as we bring you new shipments of mezcal in the future.  Look for old family photos from our partner producer families, vintage photos of Oaxaca, and snapshots from our mezcal-fueled travels in future Erstwhile bottles. 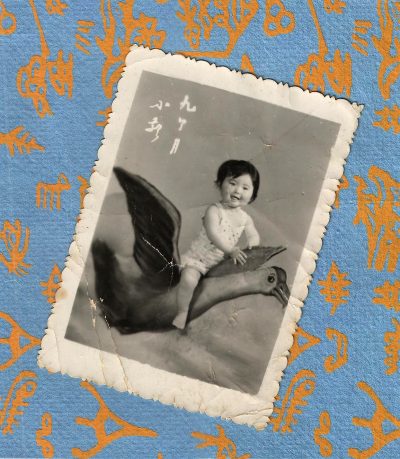 We designed our bottles as an epistolary gift to you — a series of postcards to chronicle the faces, places and stories that have made Erstwhile the mezcal project possible.

Consider our bottles’ photo backdrops as an Erstwhile family photo album in progress.  We invite you to actively participate in shaping the future of Erstwhile Mezcal, and filling in this photo album’s blank pages with us together.

Bottles from Erstwhile’s flagship lineup feature a photo of Erstwhile’s woman founder as the backdrop image.  It juxtaposes — visually and thematically — the velociraptor-riding woman warrior on the front of the bottle.

This image reinforces our message of woman empowerment and woman representation in the industry.

This is a photo of yours truly, taken in Xuzhou, China (where my grandparents lived and raised me) when I was nine months old.  Even at such a young age, I was already expressing an unmistakable penchant for riding magical awesome creatures into unchartered territories.

In terms of aesthetics and design, we chose this photo because it makes the bottle pop visually.  When viewed from a distance, the black-and-white palette is especially stunning in a full bottle.  It makes a beautiful marble-like background, and a striking contrast against the warm red-and-yellow palette on the front of the bottle.

WHY IS OUR MEZCAL PROJECT CALLED ERSTWHILE?

Definition: belonging to an earlier time or tradition

My co-founder Kevin and I wanted a name that has enough gravitas to match the antiquity, beauty, history and tradition of Mezcal production.  We also wanted a name that, ideally, connects with the English-speaking audience in the United States: the destination of Erstwhile’s flagship shipment out of Oaxaca.

Though not commonly used in modern day English, the word “erstwhile” has been part of the English lexicon since the 16th century.  It is formed from two Old English words: ær, meaning “early”; and hwīl, similar to the modern word “while”.

“Erstwhile” is apropos for Mezcal because, like the craft of mezcal production, it has been in existence for hundreds of years.  It conjures antiquity, history, and tradition.  The idea of something impossibly beautiful and complex, first made in a bygone era and then honed from generation to generation, witnessing and withstanding the passage of time. 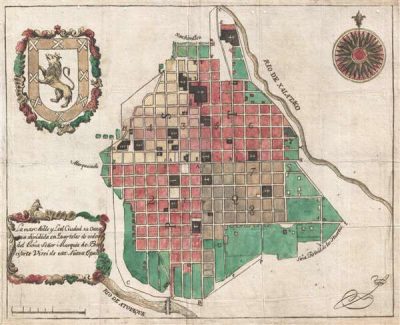 Oldest known map of Oaxaca City, from the archives of Erstwhile Mezcal

The overwhelming majority of mezcal brands on the market nowadays have Spanish names.  Back when my co-founder Kevin and I were brainstorming names, most if not all of the other ideas we came up with were actually also in Spanish, paying homage to the land where our mezcals are made.

In the end, I think it is fitting that we chose a name with roots in old English.  We wanted a name that connects with consumers and mezcal enthusiasts in the United States who do not speak Spanish.

English is also the language shared and spoken by Erstwhile’s two co-founders.  The language in which we first conceived Erstwhile the project.  The language inextricably intertwined with the growing pains of starting a company from scratch, and with the exhilarations of creating something beautiful from nothing.  English is, and always will be, Erstwhile Mezcal’s lengua materna.

Erstwhile conjures a bygone time from the past.  The more we know about a mezcal’s erstwhile provenance, by which I mean its past and its origin, the richer the experience of each sip.  A small-batch distillation is ephemeral by its very nature.  Celebrate it while it lasts, for there is no guarantee that you can experience it ever again once the batch is gone.  That is part of its beauty, and one of the many reasons I fell in love with mezcal to begin with.

But I find that the deeper I dig, the richer and more long-lasting the reward.

Take our Henequén mezcal for example.  It was love at first sip when I first encountered it at the palenque of Juan Hernández Méndez in Santiago Matatlán, Oaxaca.  But I had never heard of the plant before. I set forth to learn all I could, and find myself down an unexpected rabbit hole of discovery. 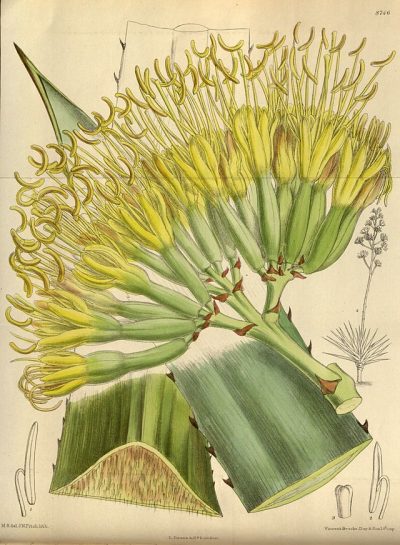 I learned about the abuse that Mayan workers experienced on these Henequén plantations, about the clash between the Mayans’ defense of their communal lands against the ruling class’s push for private ownership, eventually escalating into the Caste War of the Yucatán in the second half of the 19th century.

So when I drink Henequén now, I think about the spunk and resilience of this plant, and of the Mayans who harvested it under the Yucatán sun over a hundred years ago.  I think about the injustice of the reality they lived in, the dark underbelly of the socioeconomic conditions in which “green gold” came to be.

I think about how the day I discovered Henequén was the first time I ever drove in the Oaxacan countryside on my own, learning firsthand how those topes (speedbumps) of Oaxaca do NOT mess around.  I think about how a few months later I was back at Juan’s palenque in Santiago Matatlán. That day I saw rows after rows of bottles embossed with Erstwhile’s logo and filled with Henequén, for the very first time in my life. They were so pristine and beautiful in the morning light. 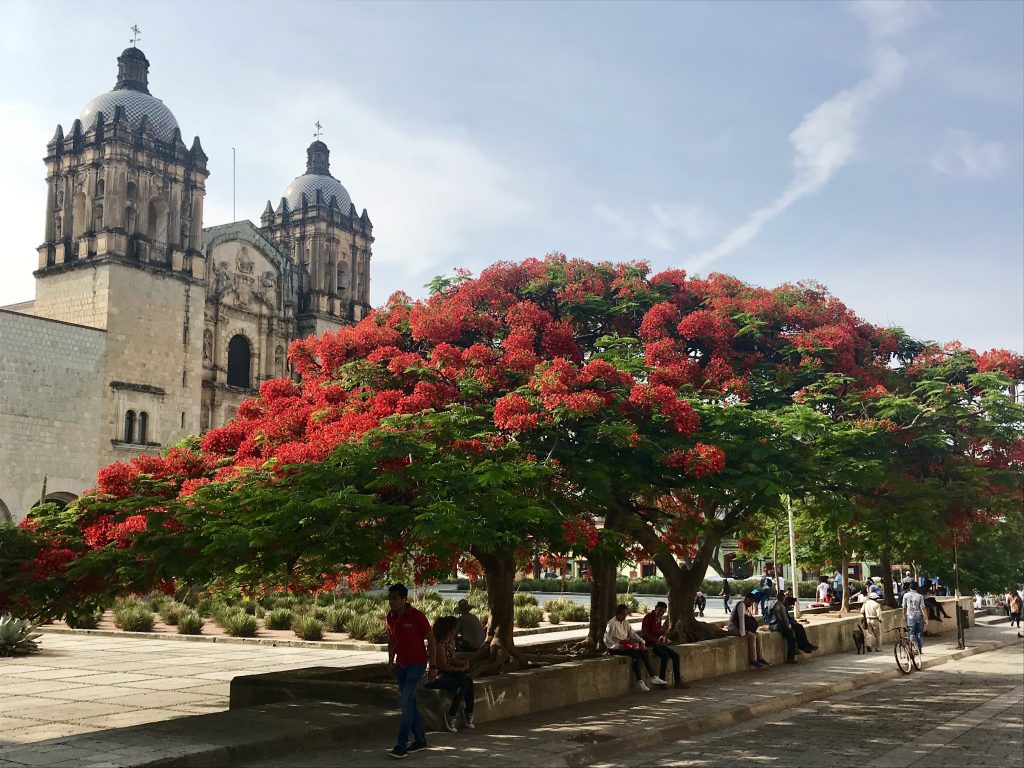 Having spent most of 2018 living in Oaxaca and working on Erstwhile’s flagship line there, this is one of my favorite memories from that year: flame trees in full bloom by the Templo de Santo Domingo de Guzman in Oaxaca City. Photo taken in May 2018.

So the word “Erstwhile” conjures memories as well.  I love that about mezcal.  That it is rich with portals to history and knowledge, open to anyone who is curious to learn.  That the experience of savoring a single expression is a living thing, growing as we grow.  Not static, but always evolving and gaining complexity over time.