Skip to content
Home/News/Part III | Why Is Mezcal So Dam$ Expensive in the United States?
Previous Next

Part III | Why Is Mezcal So Dam$ Expensive in the United States?

Welcome to the third installation of Erstwhile Mezcal’s blog series, in which I share my firsthand experiences and takeaways on Why Is Mezcal So Dam$ Expensive in the United States.

In Part I of this blog series, I observed that for Erstwhile’s first shipment of mezcals from Oaxaca to the United States, our production costs account for only about 25-35% of the shelf prices paid by US consumers.  In Part II, I explained why the three-tier system, the legal system governing alcoholic beverage sales in the United States, is the primary driver of the other 65-75% of shelf prices that US consumers pay for our mezcals.

In this post, let us dig deeper into how the three-tier system came to be, and why it is terrible for US consumers’ welfare and bottom line.

To be clear, the point of this blog series is not to criticize any particular tier.  Nor is it about any company or individual working within the three-tier system.  Erstwhile Mezcal is an importer and very much part of this three-tier system.  So are our distribution and retail partners all over the country.   Each tier, Erstwhile Mezcal included, serves unique roles and brings something valuable to the consumer.  Each tier also takes a cut to remain profitable.  All tiers, Erstwhile Mezcal included, collectively account for the 65-75% of shelf prices I estimate above.

My ultimate goal with this blog series (and really with everything we do as a company) is to empower our readers and fellow mezcal consumers with knowledge.  In this post, I dig deeper into the origin of the three-tier system because, in my experience, it rarely comes up in discussions of mezcal prices in the United States, yet makes a dramatic difference to US consumers’ bottom line.

Mezcal consumers will enjoy better selections and significant lower prices, only if direct shipment from producers and importers to consumers were to be allowed.

With the exception of alcoholic beverages, small producers can sell directly to US consumers in almost every category of craft product..  Chocolate, stationery, hot sauce, jewelry ….  Whatever I am shopping for, there are often plenty of options to choose from, thanks to the Internet.  I can, and prefer to, buy directly from the source – at farmer’s markets, street stands, the maker’s website, or e-commerce platforms (e.g., eBay, Etsy).  Placing an order online usually takes no more than a few minutes and easy clicks on my keyboard.

My money goes directly to the maker, as it should, after deducting incidentals such as tax, shipping charges, and commissions charged by platforms like eBay.

But when it comes to mezcal, most of what US consumers pay out of pocket does not go to the producer or importer.  Imagine that you, after having tried our mezcals at a tasting event, want to buy a bottle directly from us.  Or your favorite bar / restaurant / wine & spirits shop is interested in stocking our mezcals, and contacts us to place an order.  Our hands are tied, as much as we would love to sell our mezcals to you right there and then.

Under the three-tier system, it is illegal for Erstwhile – and any producers / importers of wines & spirits for that matter – to sell directly to individual consumers who want our mezcals.  Instead, we are required to go through more than one middleman, by law.  Each tier — including Erstwhile Mezcal the importer — marks up the price to remain profitable, and consumers ultimately foot the bill.

You Could Save A Lot, If Not for the Three-Tier System

You, the consumer, could potentially be buying quality mezcal for only half the price in an alternative universe without the three-tier system.

Erstwhile Mezcal the importing company and our partner producers, combined, receive 50% or less of the retail shelf prices paid by US consumers.  In other words, half (and often more) of the retail shelf prices you pay for our mezcals are spent on clearing the three-tier system, after the bottles leave our warehouse and control in the United States.

Why Does the Three-Tier System Exist?

The US alcohol beverage industry has not always had tiers.  Before Prohibition, the industry essentially consisted of suppliers (e.g., Erstwhile Mezcal) and retailers (e.g., your local bar or store).  In 1933, the 21st Amendment repealed Prohibition and gave each state the power to regulate and control alcohol sales within its own territory.

The three-tier system was born when, under the new authority granted by the 21st Amendment, most states enacted laws requiring suppliers to go through a state-licensed distributor before reaching retailers.

Before Prohibition, suppliers often controlled retailers – either directly through ownership, or indirectly through contractual agreements by which retailers (primary taverns) sold only the controlling supplier’s products in exchange for financial incentives like interest-free loans and free equipment. Such a retailer was a “tied house” in the sense that they were tied to the controlling producer.

The popular perception was that suppliers and retailers, who were often one and the same entity, pushed sales by encouraging reckless alcohol consumption, which in turn caused social evils like domestic violence and financial ruin. 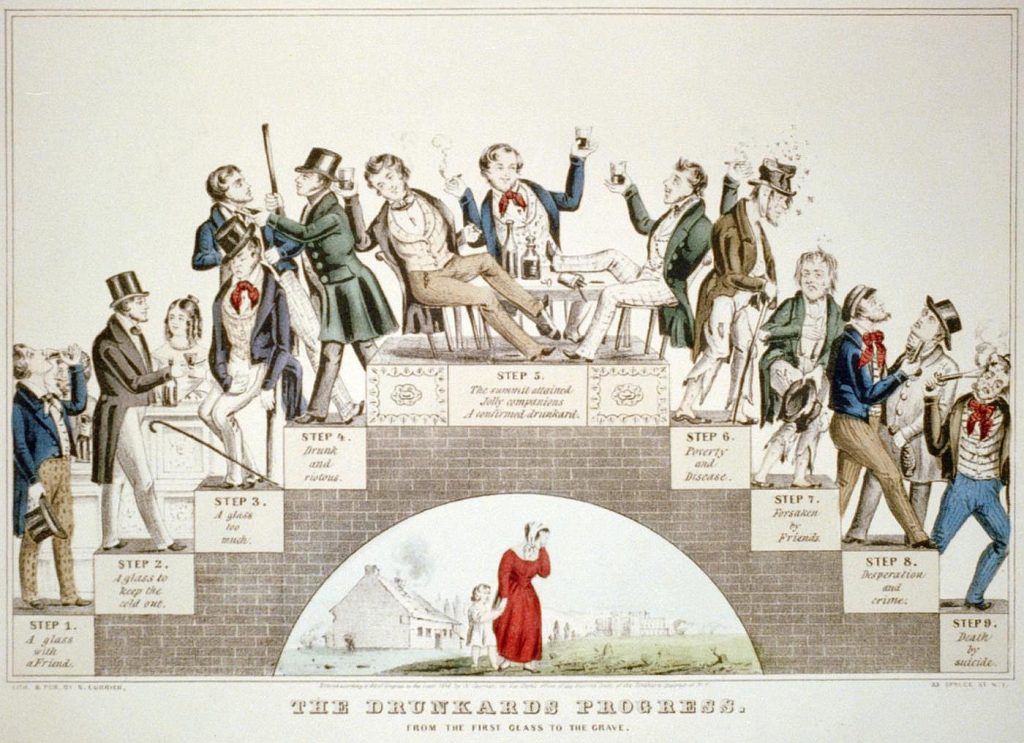 “The Drunkard’s Progress: From the First Glass to the Grave”: a lithograph by Nathaniel Currier (circa 1846) supporting the temperance movement.

Prohibition (1920-1933) was a failed national experiment.  Intending to put a stop to social disorders, it had the opposite effect.  Outlawing alcohol production and sales did not curb consumer demand, but created a lucrative black market.  Organized crime syndicates flourished as they supplied speakeasies, smuggled alcohol across state lines, and fed bootlegging profits into other criminal enterprises.  Assaults, homicides and burglaries increased significantly during Prohibition, as a result of territorial disputes between different organized crime syndicates.

Why Did the States Embrace the Three-Tier System?

State governments, post-Prohibition, could have regulated alcohol sales and consumption however they wanted under the authority granted them by the 21st Amendment.  The states had the option to not impose a three-tier system, but all did.  Why?

In 1933, John D. Rockefeller, Jr. – a teetotaler concerned about the impending re-legalization of alcohol consumption in the United States – commissioned Raymond B. Fosdick and Albert L. Scott to develop a plan for liquor control.

Fosdick and Scott, in their work titled Toward Liquor Control, proposed two alternative methods of liquor control at the state level: state government could either (1) act as a public monopoly, or (2) license private enterprises if the state was unwilling to become a liquor monopoly.

The Fosdick and Scott study turned out be extremely influential in shaping the states’ liquor control trajectories post-Prohibition.  It was a blueprint for how state governments have continued to regulate liquor sales to this day.  Most states opted for Fosdick and Scott’s “three-tier system” per option (2), using licensing as the mechanism to control alcohol sales and police consumers.  Other states – the control states I wrote about in Part II of this blog series – opted for option (1), by exerting some form of monopoly power over the distribution and sales of alcoholic beverages, thus adding a fourth tier.

Three-Tier System Is Ripe for Reform

The three-tier system was meant to rein in unscrupulous, too-powerful suppliers with “tied house” retailers in their pockets.  Small producers and importers like Erstwhile Mezcal (and so many of our peers in the craft wine & spirits industry) are not the problem that the three-tier system tried to solve almost a hundred years ago.

Therein lies the irony.  In my experience as a consumer and as a supplier, I see strangleholds on US consumers’ access to craft wine & spirits, and players in other tiers that have acquired power disproportionate to the value they bring to consumers.  Small producers and importers are not the problem here.

All of this is not to say that any tier in the system is unimportant or a villain.   Each tier serves a purpose.  Producers make the mezcal.  Importers deal with, for example, the complex regulations in more than one country and the logistics of bringing the mezcal to market.  Distributors provide a host of services including consolidation of multiple brands, warehousing, delivery, and curation.  Retailers like your neighborhood store, bar and restaurant serve you, the end user consumer.

Here is my question for you: while each tier serves a purpose and has a role to play, should it be mandated by law?

I will save that discussion for another day.  Are you intrigued?  Want to know more?

Sign up for our newsletter so we can keep you posted on future blog posts on the economics of mezcal.  You can do so by emailing us at info@erstwhilemezcal.com, or signing up at the bottom of our website.

P.S. I do not presume to speak for everyone in the mezcal industry, and welcome others’ perspectives that may differ from my own.  My opinions stated above are based on, and limited to, my own firsthand experiences of creating and running Erstwhile Mezcal.  Erstwhile’s business model, and as a result my opinions stated here, are not necessarily the same as that of other mezcal importers and brands.